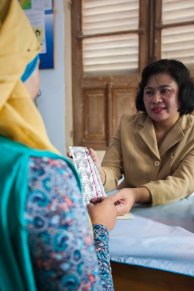 A member of the ICMM team interviews a midwife for the ICMM baseline survey. Credit: Universitas Indonesia

The maternal mortality rate in Indonesia is among the highest in Asia, and more than half of Indonesian couples who want to stop childbearing still rely on short-acting methods such as oral contraceptive pills and injectables. This mismatch of method with fertility intentions points to the lack of availability and accessibility of long-acting reversible contraceptives (LARCs) and permanent methods (PMs).

The Improving Contraceptive Method Mix (ICMM) Project sought to address this concern through targeted district-level advocacy–working with decision makers to revitalize local advocacy groups and make the case for greater family planning (FP) budgets and increased availability and training for long-acting methods. ICMM also sought to determine the effectiveness of these advocacy activities, so they could be scaled up in other areas of Indonesia.

ICMM began in Indonesia in October 2012 and concluded in November 2016. Funded by the U.S. Agency for International Development (USAID) and the Australian Department of Foreign Affairs and Trade (DFAT), with additional support from the Bill & Melinda Gates Foundation, this four-year project investigated the impact of applying targeted advocacy and knowledge management (KM) activities to improve the contraceptive method mix in two Indonesian provinces: East Java and Nusa Tenggara Barat (NTB).

The three major components of the ICMM project were:

ICMM brought together the experience and program strengths of local Indonesian organizations, using Advance Family Planning-Indonesia’s (AFP-I) methodology, and enhanced by the KM expertise and tools of the Knowledge for Health (K4Health) Project. ICMM used locally gathered data and evidence (baseline research) to develop advocacy activities, which informed knowledge exchange activities (through mapping and identification of knowledge needs). An advocacy package was then developed to expand district mobilization of FP to other underserved districts. Throughout the project, the ICMM team used knowledge management strategies to improve knowledge sharing and increase opportunity for the scale-up of lessons learned after the project ended. For example, share fairs and study tours helped district-level decision makers exchange lessons learned for increasing family planning budgets at the community level.

As a result of ICMM, the family planning field now has evidence that community-level advocacy is effective in improving programs. After three years of targeted advocacy efforts led by ICMM, funding for and uptake of LARCs/PMs increased in six districts in East Java and West Nusa Tenggara. After the intervention, contraceptive users in ICMM districts began shifting away from shorter-acting methods towards LARCs/PMs, as compared to users in control districts. 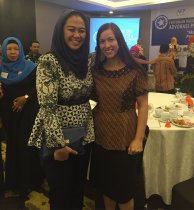 Key outcomes from ICMM include:

ICMM showed that advocacy is effective to reinvigorate FP programs, expand the method mix, and more fully meet the family planning needs of women in Indonesia. The program also improved capacity to help scale up this approach throughout the country. This district-level approach is being scaled up by the Indonesian government and its partners, to help them achieve their Family Planning 2020 (FP2020) goals and Sustainable Development Goals (SDGs).